Havan, also called Homa, or Agnihotra, is a ritual in which offerings to the Deity are burnt in the Sacred Fire along with chantings of mantras. Mantras can be declaimed aloud or recited internally, while the invocation Svaha is recited at the end of each mantra while doing the offer.

Havan Kund is the center place of this ritual, in which the fire is put on and where ghee, rice, dried fruits, herbs, dhoop and fragrant resins, and other items are offered to the fire.

Sacred Fire is the central and immutable element of each Havan, but procedures and items offered to the fire vary greatly.

There are also many traditions that have adopted this ritual, from the Vedic to the Tantric, from the Buddhist traditions to Jainism. Interestingly, the fire ritual is an ancient and universal practice, and although with procedures very different from each other, the men always worships the gods into the fire.

Sensory objects (Panchamatras) comprise of Sabda (sound), Sparsa (touch), Rūpa (form), Rasā Taste and Gandha (taste) are prevalent in human nature. There are 24 Tatvas (attributes) embedded within us comprising of 5 elements of nature in the form of Earth, Water, Fire, Ether and Space.

Lord Paraśurāma propounded in his work called Paraśurāma Kalpa Sūtra stressing the need to harmoniously balance the 5 natural elements in order to attune with our true nature of divinity which has been forgotten. He emphasizes that Fire is the only element which rises upwards burning and consuming all that is in contact with it and residue left in its purest and divine form.

Many Hindu rituals involve invoking the divine presence in an idol or in a vase (Kalaśa). Unfortunately in the Kali Yuga the elements of earth, water and air are not pure. If there are impurities at the time when the idol or vessel has been made they can heavily limit the divine presence that the idol can accommodate.

The only elements that can not be polluted are Ākāśa (space / ether) and Agni (fire). It is very difficult to do spiritual sadhana through the medium of space. So the best way to do sadhana is fire.

One of the Sanskrit words for "fire" is "Pāvaka", which means "one who purifies". Fire is pure and purifies everything that comes into contact with it.

The minimum bid (Svāhā) for any Homa Kundam is 1.001 Svāhā for each occupied side. But each Homa Kundam has a limit of Svāhā which depends on the surface of the Kundam.

For example, an Ardhahasta Homa Kundam that is equivalent to 12 square inches can receive no more than 10,000 Svaka.

Tantrika
The Homa Kundam (or Dhuni) must be with a single plane (Maykala), and there must be Kantha (throat), Nabi (navel) and Yoni (vagina). 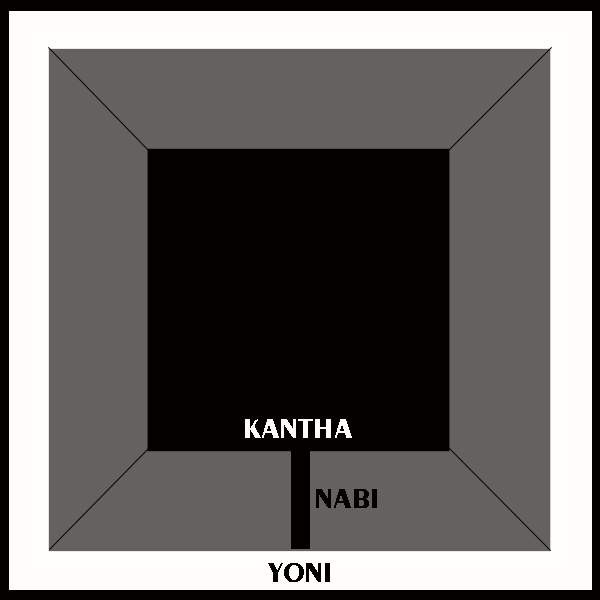 If you are in more people put a Yoni on each side occupied.

Before starting the Homa put a flower on Yoni.

Different form of Havan Kund and their tantric use

Square The most common of the Homakundam. The square form is used in Tantra to pacify divinity, or to pacify the evil influences of spirits or planets, to cure diseases. To bring peace to the world. 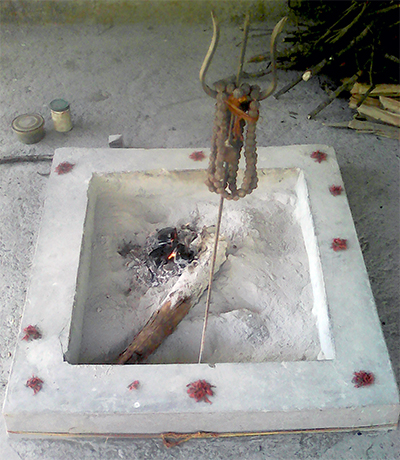 Circle Used to distract and keep an enemy or evil spirits away from home. 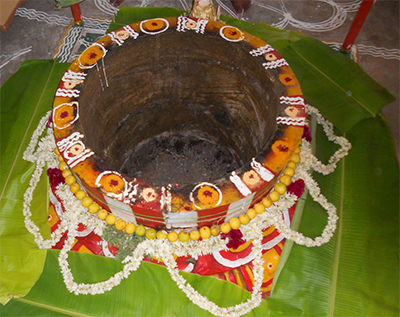 Used to attract and control someone or something. For example, an enemy, a lover, but also a spirit or a deity. 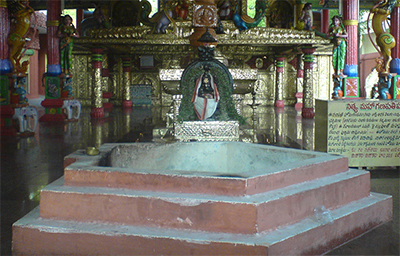 Hexagon Used to invoke and establish a deity. They can be used to stop an event, to paralyze an enemy or prevent an attack. 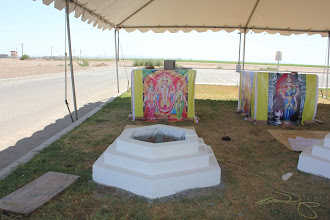 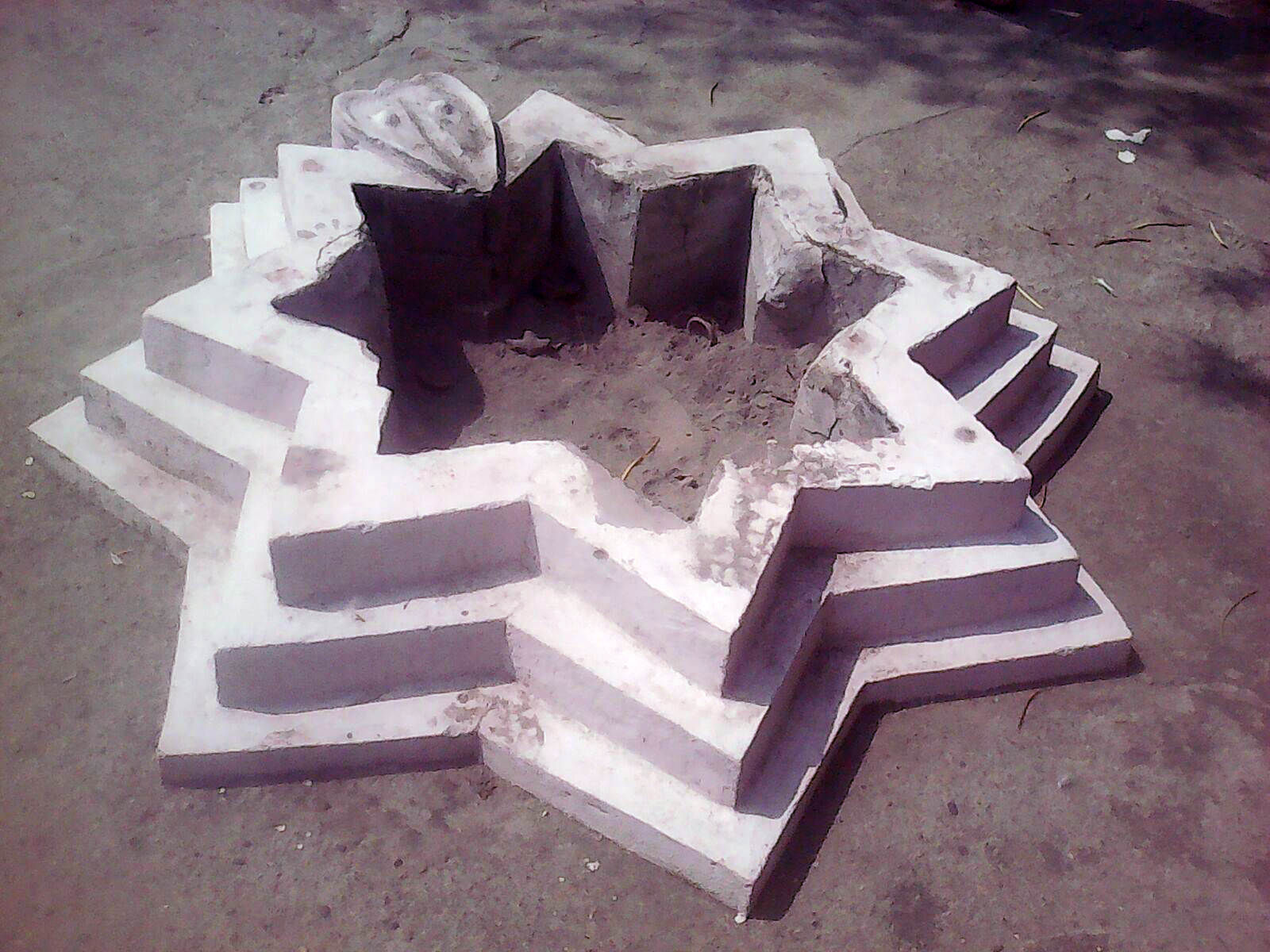 Semicircle Used to keep someone or something under control. For example, an enemy, a lover, but also a spirit or a deity. Or on themselves to get all the siddhi. 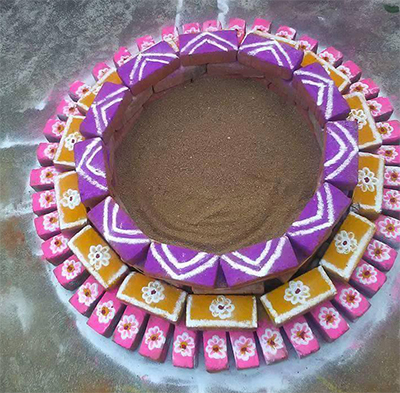 Used to have children. 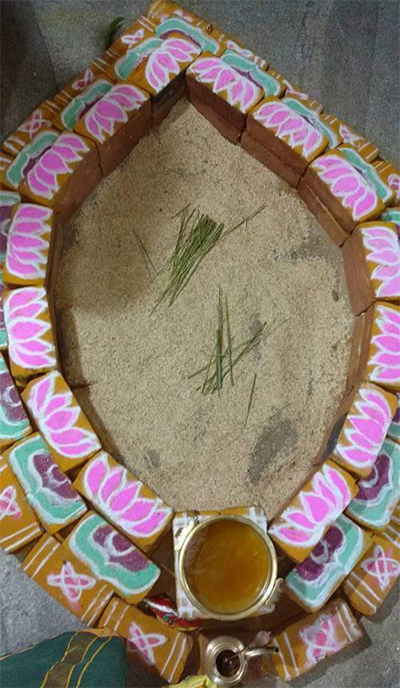 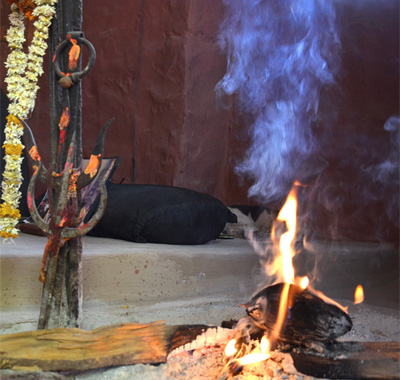