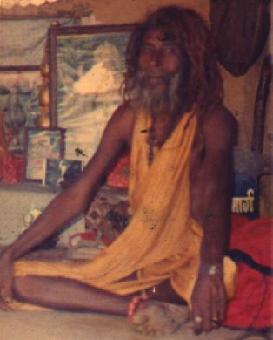 Kishan Das Aghori (also known as Krishna Das Aghori) has been one of the few Aghoris lived in the last century, nowadays  there are just a hundred in the whole India. The official date of his Samadhi is March 27th 2005. He never left his Dhuni (sacred fire) except for some rare occasion. The meeting at his Ashram has made me live again the ancient experiences of this family of Sadhu. His teachings have been precious jewels of wisdom, intelligent shortcuts toward the realization of the Self. For those who stopped at his Dhuni looking for a spiritual comfort, he was a fond father full of attentions but without attachment. He didn't love very much people  looking for amulets or magics.

As he said, he didn't have disciples but children, however his chela are only 6, 2 Western and 4 Indians: Govinda Das, author of this site and the first disciple in chronological order (1989); Balak Das, who then became a Nath; Vikram Das, who died in 2014; Radhika Dasi, born in Germany, who after Baba's Mahasamadhi took the responsibility of the ashram; Raj Nath and Lakshman Das died soon after baba in 2005.

Kishan Das lived many years in Omkareshwar, one of the most suggestive among the sacred cities in India. The small city on the shores of the river Narmada is famous for the island that looks like a Om and because it entertains one of the 12 Joth Lingam (representations of Shiva). Next to the ancient temple of Gori Somnath in the center of the island you will find his Samadhi.

Kishan Das was chela of Baba Manohar Das from Weir – Bharatpur, when he decide to become an Aghori with the blessing of his guru. He went to Kashi, in Kina Ram Ashram and was initiate into aghora sadhana, but the sadhus of the ashram decide not to change the name from Das to Ram and to add Aghori to Kishan Das, they said was not possible because he was already registered as a sadhu. So from there he become Kishan Das Aghori, later he went to Omkareshwar. 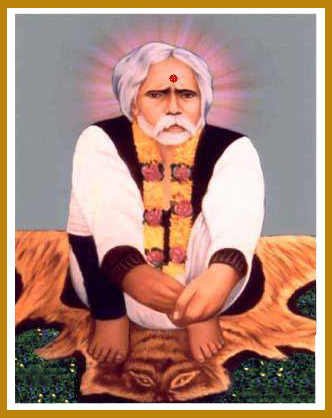 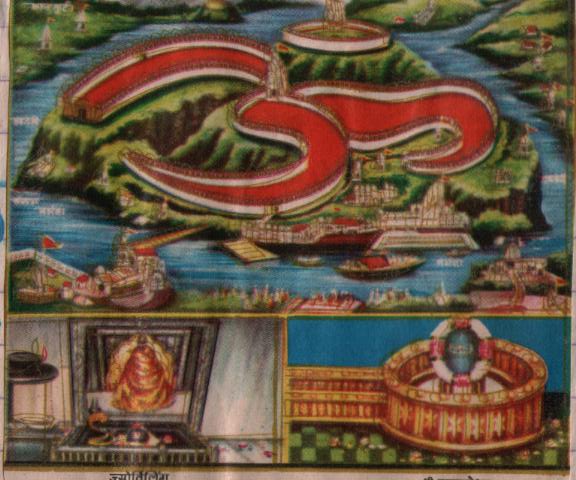 The ancient temple of Gauri Somnath contains a giant Shivlinga of almost 2 meters high on which narrate many legends. It is said that two adults fail to embrace it unless they are uncle and nephew (Mama-Bhanja). Another legend says that looking into the Lingam you can see the image of your own next birth.

It is also said that in medieval times the Mughal Emperor Aurangzeb, devoted to Islam and iconoclastic, marching towards the south came to Omkareshwar mutilating the deities of the temple of Gauri Somnath, as is evident even now, and curious about the legend, stopped before the lingam, and looking within it he saw a pig. In his anger he burned the Lingam, which has since taken its current black color and all its magical properties have gone lost forever. Kishan Das told me that in any case inside the present Lingam remained a thin white core and it is presumed that this part has still intact all its properties.

Narmada river has been for some years to the footlight of the chronicles for the construction of a series of dams that have defaced the splendid landscape and caused the forced transfer of the residents without a suit social reintegration. Omkareshwar has definitely changed its ancient face as the images that follow testify:

FRIENDS OF THE RIVER NARMADA: The Struggle Continues ...

Big changes in Omkareshwar: because of the Ujjain Kumbha Mela in 2016. Madya Pradesh government decided to make it "tourist friendly" destroying ashrams :(

It's not clear what will be the final result, but as of now they erased with bulldozer most of the ashrams, Baba's and local people's houses. In our ashram only the main room survived as of now. However, any day they can come back and knock it down as well.

The Aghori Ashram had been there for a long time, as also documented by the video I posted on You Tube, and all the pilgrims who passed stopped for a spiritual comfort and to pay homage to Baba. It’s really sad that a place of worship should be violated in this way without any restraint.

In August of 2014 in the island of Omkareshwar have been torn down by the government many houses illegally built and together with them also several Ashram including three rooms of the Aghori Peeth, the Ashram of Krishna Das Aghori. The reason? Widen the Parikrama, an ancient path that goes around of the Om traced from the hills of the island. The path may thus contain more people, the jeep will pass, and things should encourage tourism during the Kumbh Mela to be held in Ujjain in 2016.

The Aghori Ashram is there for more than forty years, and thankfully it was recognized by the government. Unfortunately the three small rooms that were demolished by bulldozers, are those who occasionally hosted pilgrims.

Here are some photos of the destroyed rooms:

Passing along the Parikrama the feeling is strange, it looks like a scene of destruction without any real sense, and the siren that warns that the dam, just opposite the island, is about to release water makes it even more spooky and surreal. Before you heard the mantra of the various Ashram here and there united with the songs of wild peacocks, which seems almost all were preyed by that strange animal that is man. I imagine when the jeeps will be able to pass what horrible concert we will be able to hear. From my point of view it is as if they wanted to pass cars in Piazza San Marco in Venice. The island of Omkareshwar has a millenary history and is one of the holiest places in India. Come back in those places, so dear to me, and observe the little enhancement of a site so unique has not left me a good feeling.