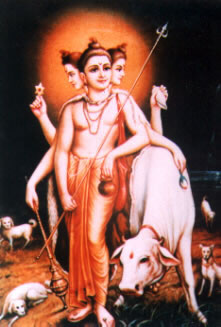 I bow to the son of Atri, who has six hands and whose lowest two hands have Mala and kamandalu,

Dattatreya, a divinity that includes the Trimurti, Brahma (the Creator), Vishnu (the Preserver) and Shiva (the Destroyer), is considered the founder of this school.

It is represented as an ascetic with the three heads of Brahma, Vishnu and Shiva together with four dogs that represent the four Veda. He has in the hands some objects of spiritual meaning: kamandal  (water's pitcher); japa mala (rosary); damru (drum); trisul (trident); shankar (shell); sudarshan (disk). Damru and trisul are in association with Shiva, while the disk and the shell with Vishnu. Pitcher for the water and rosary are the few possessions of an ascetic.

Dattatreya's parents were a very devoted couple and practised many tapasyas (austerity) to get a very desired child. His mother wanted intensely her child to be the incarnation of the Nirguna Parabrahman (the Supreme Brahman without form).But since it was impossible that the without-form could take a form, Brahma, Vishnu and Shiva granted her that her child would have been their child embodying all three the divinities.

Dattatreya is considered the highest expression of the ascetic, of the renouncer, since He has known how to draw from every thing the suggestion for the deepest meditations. Also something considered by everybody meaningless or negative, can teach us a lot. In his Avadhut Gita He said he had 24 Gurus: the earth, the water, the fire, the wind, various animals, etc. That's how he learned the various virtues, finding the spiritual education through these and other natural phenomenons.

In reality is difficult to draw a historical map of the Aghori babas. There are no official figures. Few and veiled of mystery are the news on their account. The few news that we have come from Persian sources of 1500 D.C. and from English relationships of the XVIII century. Besides this philosophy of life trespasses sometimes on other mystical schools (as the Sufis for es.), taking some techniques of meditation of it and weaving them with others. Some Aghoris have also had muslim guru or of other faiths. Despite this, the Aghoris represent an ancient tradition and there have been periods in which this particular family of sadhu has been very numerous. Today the devotion to these babas is largely practiced among the Indian middle class. 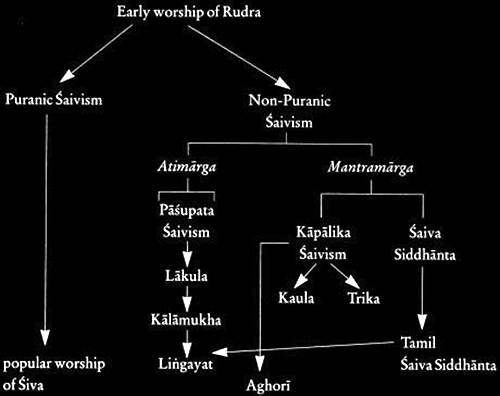 The most greater center is the Kina Ram Ashram and in the fields of cremation in Varanasi (Benares), center of important pilgrimage for the devoted Aghoris. Kina Ram is a sadhu lived in the '700 and considered to be an incarnation of Shiva.

It has esteems that to the beginning of the '900 in all Varanasi there were not more than 300 Aghoris while to our days they esteem only an about twenty, in the whole India perhaps a hundred.

Baba Kina Ram was one of the greatest saint in India. Born at Ramgarth village of Chandauli district of Uttar Pradesh in a zamindar (official employed by the Mughals to collect taxes from peasants) family of Akbar Singh and Mansa Devi. He showed sign of divinity from the very beginning. He had no interest in mundane activities of day to day life but showed inclination towards renunciation and reclusive life style that really worried his parents who married him at an early age but the newlywed bride died before second marriage (Gavama). Baba Kina Ram left his house just after this incident and got himself initiated by Baba Shiva Ram. Later on he traveled throughout India and visited all the major pilgrimages.

He practiced severe sadhana at Baluchistan in the temple of Mata Hingalaj, who directed him to Girnar mountain in Gujarat  and thereafter he was told to proceed to Varanasi. At Girnar, he had darshan of Bhagwan Dattatreya and attained divine siddhi (power). Baba Kina Ram set a fire to Agneya Rudra at Krim Kund which had been burning for the last 400 years. Bija Ram and Ram Jeyawan were his famous disciples.

During Mughal rule the society was plagued with several iniquity. Baba Kina Ram opposed the tyranny of local rulers and taught people to rise above caste, creed and sectarian views. He showed miracles to prove that a true saint transcended human power and could not be cowed down by rulers or kings who led luxurious life. The stories of his miracles are very famous in North India. He was laid to rest in the lap of Mata Hingalaj at Krim Kund and thereafter the charge of ashram passed on to Bija Ram.

The symbols of Dattatreya

The cow is the Mother Earth and Dharma. She is Kamadhenu the wish-fulfilling cow.

The four dogs symbolize the four Vedas, the repositories of spiritual wisdom.

The trident indicates that He has transcended the three gunas, which constitute the illusory world: Sattva - illumination, Rajas - activity and Tamas - inertia.

The Sudharshana Chakra indicates that He is beyond the cycles of time that is past, present and future.

The Conch represents the eternal sound AUM, which is the sound manifestation of God, as well as the vital principle within us and the universe.

The Bhasma ashes indicate his detachment (vairāgya) and its purity. The ashes symbolize the fleeting nature of all matter.

The begging bowl teaches us that we should share our wealth and food with others.

The rosary (japa-mala), reminds us that our first duty is to chant the holy name of the Lord and meditate on Him.

Shri Dattatreya, to bless His devotees, wanders in the guise of a guest at lunchtime. That is why it is said that a guest should be treated as an incarnation of Dattatreya. 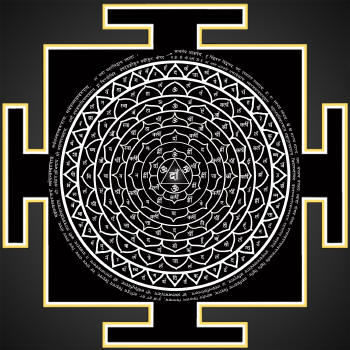 3) Shri Dattatreya has held Mala, Kamandalu, Trishula, Damaru, Shankha and Chakra in his six hands, Let my hands be protected by him. Let Kambukantha protect my throat. Let Sumukha protect my mouth.

7) Let Shri Gurudev Datta who can take many forms/incarnations; protect me in and out of the house/body. Let anything which is not covered by this Kavacha, be protected by Divadrushti.

8) Let Gurudev Datta protect me from tyrant government, enemies, wield animals, bad things performed to trouble me, my sins, mental diseases and disease of my body, and all other troubles, difficulties.

9) Let son of Anusuya protect my money, food, my house, my wife, my children’s, my pets, my servants and my relatives.

10) Let Balonmatta protect me in day, night and the period in between day and night from all pancha mahabhutas (earth, water, fire, air and sky) and from death.

11) Anybody reciting this Datta Kavacham with devotion and faith will become free from all his troubles, difficulties and so also from troubles by planets such as Saturn, Mars etc.

12) Ghosts, Demons etc. can’t trouble such devotee who recites this Kavacha daily. He will become happy, all his desires will be fulfilled, become successful in his endeavors and lead a healthy, wealthy and peaceful life. After his death he will go to Datta Loka. 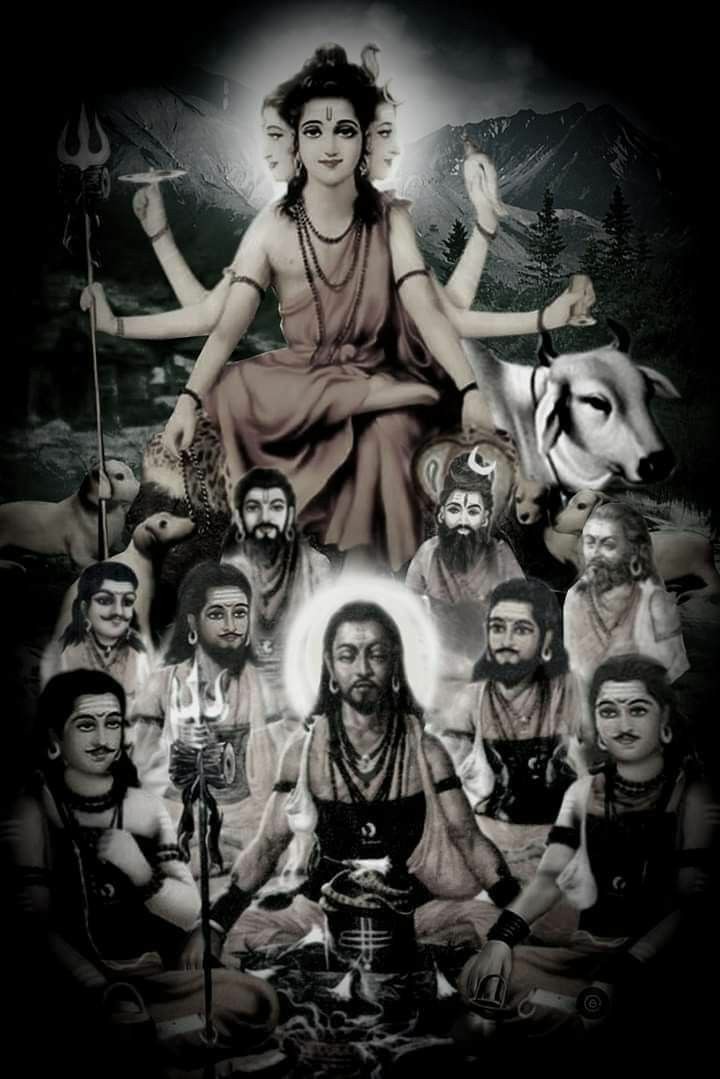