Rudraksha in Sanskrit means "Shiva's Eyes", it is a seed used to compose the mālā, a rosary of 108 beads for meditation. This seed can have different 'faces' (mukhi), any number of faces is associated with a particular deity and has a mantra to be activated.

He who holds thirty-two Rudrāksa beads on his neck, forty on his head, six on each ear (12 on two ears), twenty-four beads on two hands (twelve on each hand) thirty-two beads on two arms (sixteen on each), one bead on each eye and one bead on the hair on the crown, and one hundred and eight beads on the breast, (251 in all) becomes himself Mahā Deva. (Śrīmad Devī Bhāgavatam) 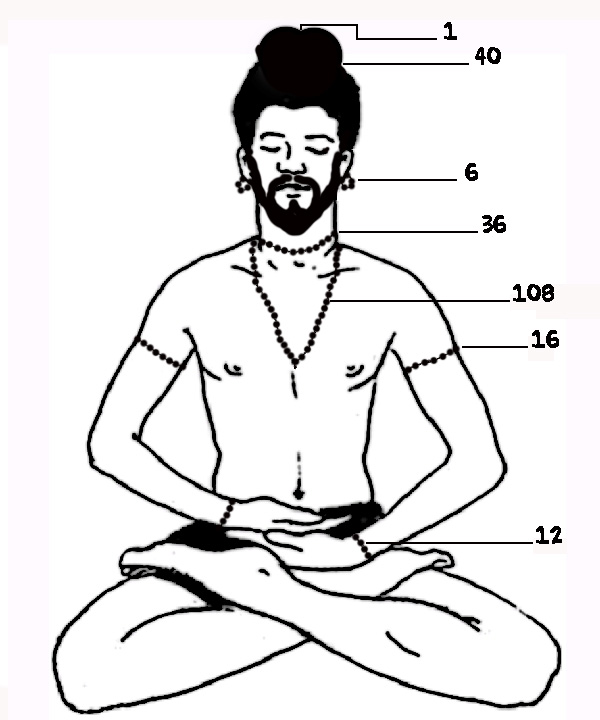 There are several ways to wear Rudrākṣa, there is not a single rule. Shiva in the Shiva Purana (1 chap. 25 verses 24-39) thus enumerates the Rudrākṣa to be worn on the various parts of the body:

“The wearing of Rudrākṣa is spoken of as conducive to the destruction of great sins. If eleven hundred Rudrākṣas are worn on the person, the man assumes the form of Rudra.

Even in hundreds of years it is impossible to describe adequately the benefit derived by wearing eleven hundred and fifty Rudrākṣas.

A devout man shall make a coronet consisting of five hundred and fifty Rudrākṣas.

A person of pious nature shall make three circular strings in the manner of the sacred thread, each having three hundred and sixty beads.

O Maheśvarī, three Rudrākṣas must be worn on the tuft and six in each of the ears right and left.

O Parameśvarī, the person by whom so many Rudrākṣas are worn is worthy of being bowed to and adored by all like Maheśa.

Such a person while in contemplation shall be duly seated and addressed “O Śiva”. Seeing him, every one is freed from sins.

This is the rule regarding eleven hundred Rudrākṣas. If so many are not available, another auspicious procedure I mention to you.

One Rudrākṣa shall be worn on the tuft, thirty on the head, fifty round the neck; sixteen in each of the arms; twelve round each of the wrists; five hundred on the shoulders, and three strings each having hundred and eight in the manner of the sacred thread. He who wears in all a thousand Rudrākṣas and is of firm resolve in performing rites is bowed to by all Devas like Rudra himself.

One Rudrākṣa shall be worn on the tuft, forty on the forehead, thirty-two round the neck; hundred and eight over the chest; six in each of the ears; sixteen round each of the arms; O lord of sages, according to the measurement of the forearms, twelve or twice that number shall be worn there. A person who wears so many, out of love, is a great devotee of Śiva. He shall be worshipped like Śiva. He is worthy of being always honored by all.”

Repeat and touch right eye, left eye and forehead after each mantra

Bow or supplicate, then chant this last prayer:

This is the procedure used in the Vedas by Brahmana, Siddha, and Asura to obtain blessings from Lord Shiva.

Very effective and used in all types of rituals. If any particular Mala is not available, a Rudraksha Mala can be used without any hesitation with the exception of mantras for the purpose of killing (Maran) and Yakshini Siddhi. So it is considered the best of all rosaries.

It is the best Mala to recite the Mantras of Durga and Mahalakshmi. If you wear it, it peaceful and calm your mind, it helps to cure insomnia, headaches, and relieves the mind from stress and tension. It is associated with Shiva, the planet Saturn and the planet Venus.

Agate is a semi-precious opaque stone that is found in many colors. These stones can be used instead of precious stones with the same results. Agate is a symbol of success, courage and protection.

Kali Hakik Mala is associated with Kali, Dhumavati and Bhairav ​​and used in their respective tantric rituals. It induces spiritual inspiration. It is also used to pacify the negative effects of the Planet Saturn or to help strengthen the planet in the horoscope.

Associated with Kali, Durga and Shiva, used in the rituals of Vamachara Tantra and also widely used in Tibetan Buddhism. The skull-shaped pearls are reminiscent of the skull necklace wearing the Goddess Kali which symbolizes liberation from the cycle of life and death, knowledge and wisdom. The bone reminds us of impermanence, suffering and changes in life, is a constant reminder of the awareness of death and helps us to concentrate on living the present moment.

It consists of turmeric bulbs, considered one of the most purifying herbs in Ayurveda. The Turmeric Mala is used to perform Anusthan (special prayers) and destroy enemies and achieve success in lawsuits. The one who wears this Mala acquires spiritual powers and attains peace of mind, frees himself from anxiety, depression and tension. This Mala is particularly used to worship Devi Bagalamukhi and the planet Jupiter.

This Mala made of lotus seeds is used to recite mantras of Goddess Lakshmi.

Lotus seeds are also offered during prayer rituals. Devotees of the Goddess often wear this Mala around their necks.

Putra Jeeva Mala is made using 108 seeds of the Putrajeeva tree, it is also known as Putra Prapti Mala. The Putrajeeva tree is known to have medicinal, mystical and sattvic properties related to conception. Making Japa Mala with the mantras of Jupiter, the Sun or Santan Gopal is considered an aid to conceive a child.

Mala made of sandalwood is used for peace and to enhance worship rituals. It is associated with Ganesh. Helps meditation by encouraging tranquility.

Sandalwood is traditionally considered one of the purest substances and is also used for its medicinal properties.

The sandalwood garland is excellent for welcoming and honoring guests.

The Red Sandal is the representation of Brahma and Gayatri. The red sandal Mala calms the Pitta Dosha and helps to conquer the senses. It is said that it magnetizes positive vibrations and makes people mentally strong.

Red sandalwood is an excellent medicine, is used to treat digestive tract problems, fluid retention and cough, is recommended for headaches, improves focus and concentration.

To satisfy any sacred and virtuous goal, the Silver Pearls Mala is the most effective. It is associated with the Moon and the Goddess Parvati.

Gold is a symbol of spirituality and development. It can be worn to inspire patience in understanding others and ourselves. It is associated with the Sun and the Goddess Bhuvaneshvari.

Rubies are a symbol of devotion and love. An excellent stone as protection. Rubies are considered extremely powerful for healing the chakras and for promoting health, wealth and wisdom.

In many ancient cultures, pearls were symbols of the Mother Goddess. Even today pearls are associated with the cult of the Devi, especially when performing the Japa Mala of Sarasvati and Bala. The pearl Mala is also used to sing the name of Vishnu and all its incarnations and to pacify the negative effects of the Moon.

Wearing a Mala of pearls has a refreshing effect on the mind and body, develops a positive aura, and gives emotional strength.

The Mala, derived from the roots of the Dharba herb, is used for all sacred and virtuous activities.

This Mala is considered the best to worship Vishnu, Rama and Krishna. According to Ayurveda, it is very useful for treating diseases related to the throat and is used as Kanti (tight necklace to the throat). It is also used for body purification.

The seeds can be red, black or white. They are associated with the Goddess Radha,

so Krishna often wears a garland of Gunja seeds.

The rose wood Mala is associated with the heart chakra, imparting compassion and love to the wearer. The energy of rosewood is mainly feminine and focused on health and spiritual beauty.

The conch is the symbol of truth of Dharma. Conch Mala is used for special tantric rituals. It is said that black magic does not work on a person wearing conch shell mala.

This Mala is loved by both Vishnu and Krishna. Ancient texts narrate that Krishna made a Mala for Radha from these seeds, as did Rama for Sita. Vishnu gave this Mala to Skanda when he appointed him commander-in-chief to increase his strength. Vaijayanti is used for Vashikaran (attraction) and Devi Siddhi (meditation) as this seed comes from the forests of Braj where the Gods love eternally. It balance all the doshas.

It is used in the sadhana and worship of Lord Ganesh, Hanuman and planet Mars. It is also useful for people who are subject to anemic conditions.

It is recommended for blood related diseases.