In many traditions such as Hinduism, Buddhism, Jainism and Sikhism, Pūjā is the ritual of worship, it is the offerings to the divine. There are various ways of celebrating Pūjā and every tradition has developed its own rituals varying significantly between regions, temples and occasions.

In Hinduism we could synthesize 16 basic steps (ṣoḍaśa upacāra) common to all varieties of pūjā:

Ganesh, Lord Ganapati, is invoked before commencing any work, any Pūjā. He is the creator (Vighna Karta) and also destroyer (Vighna Harta) of obstacles.

He represents the earth element residing in the Muladhara Chakra at the base of spine.

By praying to Lord Ganapati, this chakra is activated. Our thinking patterns change, unwanted desires are removed bringing in mental peace and restoring health in individuals. The thought that " I and the world is same and we are not separate from each other" is established, one pointed focus is achieved and any work undertaken becomes successful (Karya Siddhi) bringing in happiness in our lives.

Use of Kalash in Pūjā

Kalash (water vessel) is a symbol of good auspice of Hindu culture. It was created during the Samudramanthan or the great churning of the ocean. All deities can reside in the Kalash. Therefore, it has an important place in the puja ritual.

The worship of Kalash is widespread in Hindu ceremonies such as Griha Pravesha (Pūjā for the new house), to give the name to the child, in marriage, in the Havan, in the Vāstu Dosha (to give harmony and peace to the house), in the festivities and in the daily worship.

Kalash and the 5 elements:

The base of the metal vase represents the element Pṛthvī (Earth);

the opening of the mouth - Vāyu (air);

In the context of the chakras, Śira (head) - the upper part of the coconut symbolizes the Sahasrara chakra and the Mūla (base) - the base of Kalash - Muladhara chakra. 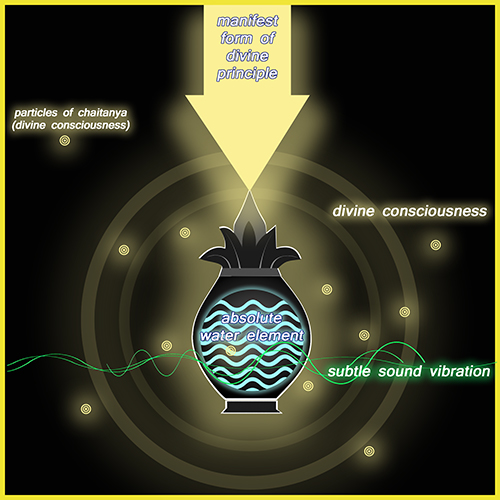