The Matrikas are very ancient goddesses and there are several Puranic texts relating to their origin. Markandeya Purana, Agni Purana, Matsya Purana, Vamana Purana, Varaha Purana, Kurma Purana, Suprabhedagama and other Agamas contain references to Matrikas. They are the different forms of Adi Parashakti and at the same time they are the personified powers of different Devas.

In the eighth chapter of Devi Mahatmya (from the Markandeya Purana), thus the 8 Matrika emanations of the Devi are introduced:

On hearing that roar the enraged asura battalions surrounded the lion, the Devi (Chandika) and Kali on all the four sides.

At this moment, O King, in order to annihilate the enemies of devas and for the well-being of the supreme devas, there issued forth, endowed with exceeding vigour and strength, Shaktis from the bodies of Brahma, Shiva, Guha, Vishnu and Indra, and with the form of those devas went to Chandika.

Whatever was the form of each deva, whatever his ornaments and vehicle, in that very form his Shakti advanced to fight with the asuras.

In a heavenly chariot drawn by swans advanced Brahma's Shakti carrying a rosary and Kamandalu. She is called Brahmani.

Maheshvari arrived, seated on a bull, holding a fine trident, wearing bracelets of great snakes and adorned with a digit of the moon.

Ambika Kaumari, in the form of Guha, holding a spear in hand riding on a fine peacock, advanced to attack the asuras.

The Shakti of Hari, who assumed the incomparable form of a sacrificial boar, she also advanced there in a boar-like form.

Narasimhi arrived there, assuming a body like that of a Narasimha, bringing down the constellations by the toss of her mane.

Likewise the thousand-eyed Aindri, holding a thunderbolt in hand and riding on the lord of elephants arrive just like Sakra (Indra).

Then Shiva, surrounded by those shaktis of the devas, said to Chandika, 'Let the asuras be killed forthwith by you for my gratification.'

Thereupon from the body of Devi issued forth the Shakti of Chandika, most terrific, exceedingly fierce and yelling like a hundred jackals. 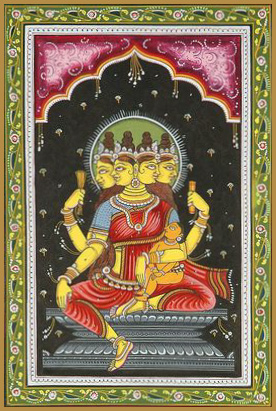 Brahmāṇī (ब्रह्माणी), also known as Brahmi, is Brahma's creative power or Shakti. She is yellow-hued and with four heads and four (sometimes six) hands. She carries a rosary, a kamandalu (water pot), a book and a noose in her hands and one hand is in the Varada Mudra. She is seated on a swan as her Vahana (vehicle). Sometimes, she is depicted with a baby/child sitting on her lap, an element very common in Matrika iconography, validating their 'motherly' natures.

Salutations to You, Oh Devi Narayani! Who assumes the form of Devi Brahmani and ride the celestial chariot yoked with swans, and sprinkle water with Kusha Grass. 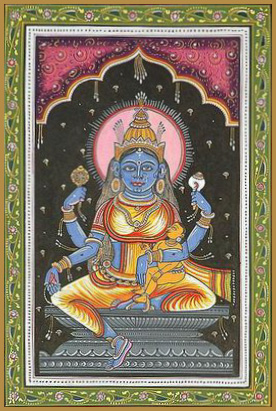 Vaiṣṇavī (वैष्णवी) is the female creative energy of Vishnu and is very similar to Him. She is dark and beautiful and has four or six hands in which she bears the shankha (conch), chakra (disc), gada (mace), padma (lotus), Varada Mudra and Abhaya Mudra. Like Vishnu, she is depicted sitting on Garuda, and wearing various ornaments.

Salutations to You, Oh Narayani! Who hold the most excellent weapons: conch, discus, mace and bow and assume the form of Devi Vaishnavi. Please be Gracious to Us. 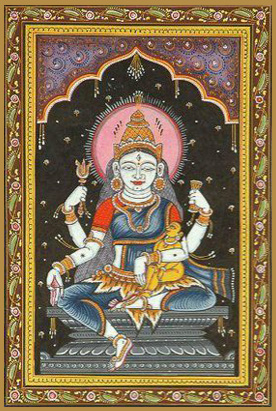 Māheśvarī (महेश्वरि) is the creative power of Shiva, and is also known by the names Raudri, Rudrani, Shivani and Maheshi. She is white complexioned, and has three eyes. She has four (or six) arms, two of which are in the Varada and the Abhaya Mudras, while the other hands carry a Trishula (trident), Damru (drum), an Akashamala (rosary) and sometimes a skull and serpents. She rides Nandi and is adorned with a Jatamukuta (a crown of matted locks), and the crescent moon.

Salutations to You, Oh Narayani! Who bear the trident, moon and the snake, and ride the great bull in the form of Devi Maheshvari. 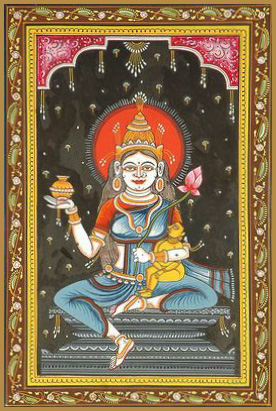 Indrāṇī (इन्द्राणी) As Indra's feminine principle, this Matrika is also known by names as Aindri, Mahendri, Shakri, Shachi and Vajri. A dark color hued goddess, Indrani rides a charging elephant and holds a Vajra (thunderbolt), a goad, a noose and a lotus in her four (or six) hands. She is three eyed, but may sometimes have a thousand like Indra. She wears a cylindrical crown (Kirita Mukuta), and sits under the Kalpaka tree.

Salutations to You, Oh Narayani! Who, decorated with a diadem and holding the great thunderbolt is blazing with the brilliance of a thousand eyes, and who took away the life of demon Vritra in the form of Devi Aindri. 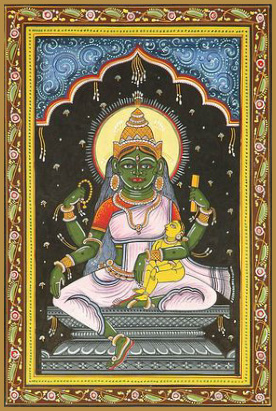 Kaumarī (कौमारी) is associated with Skanda or Kartikeya or Kumara, the son of Parvati and Shiva, and hence has names like Kumari, Kartiki, Karttikeyani and Ambika. She has four or twelve arms in which she carries multiple weapons like the Danda (stick), Dhanus (bow), Bana (arrow), Dhwaja (flag), Ghanta (bell), Padma (lotus), Patra (bowl), and Parasu (axe) among other things. She rides a peacock much like Skanda and like him, is sometimes depicted with six heads. Her abode is under a fig tree. In Tamil Nadu is popularly worshipped in many temples.

Salutations to You, Oh Narayani! Who is surrounded by peacocks and cocks and bear the great spear, who is the sinless one and assume the form of Devi Kaumari.

Vārāhī (वाराही) or Vairali, is the female energy of Varaha, the boar incarnation of Vishnu. Like Varaha, Varahi too has the head of a boar and the body of a human. This dark complexioned goddess, pot- bellied, wears a Karanda Mukuta with other ornaments and has six arms. In the hands She holds a Danda (rod of punishment), goad, a Vajra or a sword, and a Panapatra. Sometimes, she carries a bell, Chakra, Chamara (a yak's tail) and a bow. She is also among the 64 Yoginis.

Varahi is worshiped by all the three major schools of Hinduism: Shaktism (goddess worship); Shaivism (followers of the god Shiva); and Vaishnavism (devotion to Vishnu).

She is usually worshiped at night, and according to secretive Vamamarga, Kaula marga Tantric practices.

Salutations to You, Oh Narayani! Who assuming a ferocious form holding a great discus, rescued the Mother Earth with her tusk in the form of Devi Varahi, the Auspicious One. 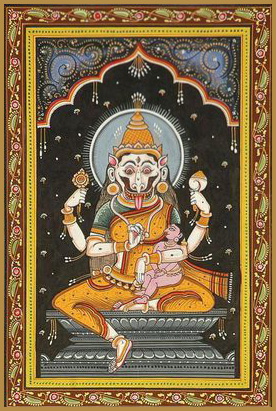 Nārasiṃhī (नारसिंही), also known as Narasimhika, is a disputed Matrika, with some sects recognising her and some not. She is the female principle of Vishu's avatar, Narsimha. With the head of a lion and the body of a woman, Narsimhi 'throws the stars into disarray by shaking her lion mane.' She holds the same accoutrements as Vishnu: a Sankha (conch), Chakra (disc), Gada (mace) and a Padma (lotus) in her four hands.

Salutations to You, Oh Narayani! Who in the Form of Narasimhi (Woman-Lion), in fierce rage, undertook to kill the demons, and who bear the task of protecting the Three Worlds. 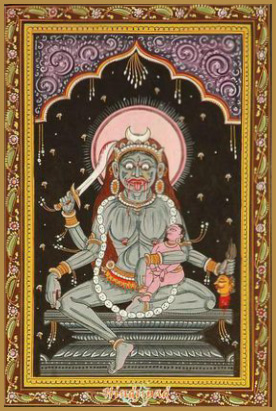 Cāṃuṇḍā (चामुण्डा) unlike all other Matrikas, who represent the female energy of a male deity, Chamunda is the power of Devi Chandi. She is also called Chamundi or Charchika and resembles Chandi (or Kali) in her fearsome form. The identification with Kali is explicit in Devi Mahatmya. She is black-skinned with a terrifying face and a sunken belly. She wears a garland of human skulls and carried a sword, a Kapala (skull), a severed head and a Trishul. She rides a jackal, and sits on a corpse. She has drooping breasts, and blood drips out of her mouth. On her head there is a cresent moon and a Jatamukuta (a crown of matted locks).

Salutations to Narayani! Who has a dreadful face with fangs, and who is adorned with a garland of severed heads.

Who in the form of Devi Chamunda destroyed the demons Chanda and Munda.