Navaratri is an important Hindu holiday observed for 9 nights and 10 days. During Navaratri the nine forms of goddess Durga are worshipped:

Navaratri is celebrated four times a year. As per Mahakala Samhita they are:

Of these, the Sharada Navaratri of the month of Puratashi and the Vasantha Navaratri of the Vasantha kala are very important. If you refer to the agni purana, then it is said that the Puratashi and Panguni (in Tamil months) i.e. Asvin and Chaitra are like the two jaws of Lord Yama. If one wants to escape the mouth of Yama, then one should celebrate Navaratri on these two occasions. A similar analogy is presented in the Devi Bhagavatam. Devi Bhagavatam also talks in detail on how one should observe fasts, and how one should meditate/work on these days. According to legend, Durga sat on the tip of a needle for nine days, doing a severe penance to destroy the evil Asura Mahisha. On the first three days, she meditated as Herself, the next three days as Mahalakshmi and the last three days as Sarasvati. This signifies progression from tamsik, to rajasik, to satvik and eventually obtaining liberation. The tenth day during Sharada Navaratri is called vijayadashami to signify the victory on the day of dashami. It is, however, a long tradition that one reads the Devi-Bhagavatam or the Devi Mahatmyam (Durga Saptasati, 700 verses on Durga) during this period. Devi Bhagavatam notes that Rama meditated and fasted for nine days after Sita was kidnapped by Ravana. There are numerous such incidents on how people's wishes were granted.

The other two Navratri’s are known as Gupt Navratri meant for Sadhaks and performing special powerful tantrik rituals.

Ashad Navaratri, also known as Gupta Navratri or Varahi Navaratri, is a 9-day festival dedicated to Goddess Varahi Devi. It is observed in Shukla Paksha of Ashad month. These are very auspicious days for the tantriks, sadhaks, for sadhana and also for any other specific tantrik pooja to resolve the materialistic problems. By keeping fasts, chanting shlokas and mantras, the devotees show their regard for the Goddess. It is believed that during Navratri, the Goddess promptly heeds to devotees and fulfill wishes. She is worshiped in the three forms of the divine femininity, as the remover of vices, as the bestower of wealth and prosperity and as the Goddess of wisdom.

There are numerous rites and traditions observed during the Navaratris. Rituals that vary from region to region. One of the most important of these is Chandi Homam.

At morning, I bring to mind the Supreme Goddess, whose hands have rays of light like the winter moon, which has crocodile-shaped earrings and a necklace studded with gems, whose thousand hands are of a beautiful blue color due to the excitement of battle, whose feet have rays similar to those of a red lotus and which is supreme.

At morning, I salute Caṇḍī, who is able to destroy legendary demons like Mahişāsura, Caṇḍa, Muṇḍa and Śumbha. I salute the one who with her virtuous sport attracts Brahmā, Indra and sages, she who is present in all forms of demigods, and who has infinite forms.

At morning, I adore the Goddess, the one who fulfills the desires of living beings, who is the mother who supports everything, who destroys the difficult pains of the whole world, which takes a form for the liberation of the world from the cycle of birth and death, which is the unsurpassable Māyā respectfully worshiped by Viṣṇu.

He who reads these three Śloka on Goddess Caṇḍikā, achieves all the desires and goes to the world of Viṣṇu. 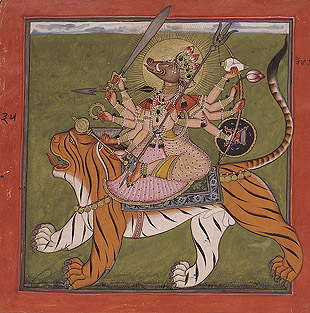 Varahi is one of the Matrikas, a group of Mother Goddesses in the Hindu religion.

With the head of a sow, Varahi is the shakti (feminine energy, or sometimes, consort) of Varaha, the boar Avatar of the god Vishnu.

Varahi is worshiped by all the three major schools of Hinduism: Shaktism (goddess worship); Shaivism (followers of the god Shiva); and Vaishnavism (devotion to Vishnu). She is usually worshiped at night, and according to secretive Vamamarga, Kaula marga Tantric practices.

While starting the puja for Varahi:

(Be compassionate as remember)

(when i remember your face)

(that very movement destroy my enemies)

Varahi dandanayaka of Lalitha MahaRagni, she destroys bad and protects the good.

Varahi is power of time resides in Ajña, rules the time.

After you have done the Purascharana of Varahi, to destroy the enemies just visualize the form of Varahi face and recite her mantra

During the 4 Navaratris it is a great omen for the Sadhaka to feed and give offerings to the young virgins. The young girls must be at most nine and at the minimum two and must be aged between 2 and 10 years.

Thus they are called according to age, in brackets their respective mantra: